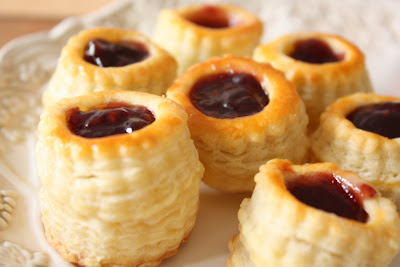 For these tarts I have used a rough puff pastry recipe that I have posted earlier on here. This pastry is very versatile and can be used to make a variety of tarts, biscuits and cheese sticks. This time around though I used it to make mini shells and filled them with jam from a bottle. I call them my thimble tarts. They look very pretty, dainty and fragile. If that is what you're looking for of course. With shells like these the fillings that you could use are as limitless as your imagination. You could fill it with marmalade, jams, curds or with custard and top it with a slice of fruit. And the rest, they say, is pastry.

I think the picture below explains itself. Before placing the 'rings' on top of the rounds, the edges of the rounds should be brushed with some egg yolk to make the rings adhere when they bake, and the top of the rings too should be brushed with egg yolk to give them a nice golden hue when baked. I then piped the jam into the shells instead of spooning them in. It's quicker and less messy too. 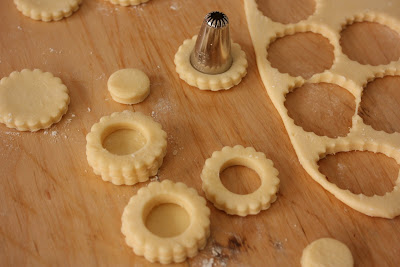 For the sake of presentation it would be lovely to use different coloured jams or fillings and you could arrange them in rows of red, yellow or topped with bits of fruits like halved grapes or small strawberries (can there be small strawberries?), blueberries or cherries on a large oblong china or better still a silver platter. It would really look beautiful. I wish I had done that here, just for show, but I just wasn't up to it.

TIP : Do roll the puff pastry rather thinly otherwise you might end up with mini KL twin towers. But if that does happen, all is not lost. Simply peel off part of the bottom layers of pastry to bring them down a notch.

TIP : Be prepared too for some of the thimbles to topple over and look like live critters as the 'grow' in the oven. That happens if you don't roll out the pastry evenly so some parts are thicker than the other part which results in a lopsided tart shell.:D. But don't worry it's not the end of the world. What I do is to peel off the bottom layer to even it out and you're done.

TIP : Do store in an airtight container and use as soon as possible to get maximum crispiness. I would recommend not to keep it longer than a day and fill just before serving. So get all those fillings ready in pastry bags to pipe.
Posted by Zurin at 10:07 PM

ur puff pastry is so puffy n light.i am very tempted to use ur recipe for 'mille feuille' but am not sure if i can get it as good. looks better than store-bought pastry, n since u made it with butter, it's sure to be tons better. i never buy ready-made pastry after taking a lesson in pastry making n discovering tt they use tt waxy 'industrail' margarine tt never melts. yuks.

Oh yes do use the recipe for mille feuille. I too was just thinking of making that with the left over that I have. Don't worry it will definitely rise puffy and high if u follow the instructions. this recipe has never failed me.much easier than puff pastry which uses yeast but it rises just as well. although I do think that puff pastry stays crispier longer. But this really is nice and buttery. You must store in an airtight container if you want to keep it for a few hours. I have only bought ready made puff pastry once when I was really desperate and time was short.Yes they wld NEVER use butter wld they? yuks too.

hey zurin, make the mille feuille for us pls :) btw, i left u a comment on ur kuey tiao post. if u have a latest comment widget (mine's on the left column; u can copy frm there), u can tell when ppl leave comments).

Thanks terri. Know what? I think I will make Jamie Olivers portugese tart instead. I was just flipping his book just now and I just told myself I have to try it. If it turns out ok and IF the foto turns out ok(it seems that foto is as important as the food now..sigh)then I will post it. U just dont know how many food that I have not posted becos of the lousy fotos!!!:D

but ur photos r good, like the ones on this post. do u photoshop or use microsoft photo editor or picasa 3? all d photos prior to my post on quiche were not adjusted. after using these editing tools, u'll be shocked at how good ur pics r. i've erased tons of photos which i thot were hopeless. if only i knew. u can upload picasa for free on google. u have to pay for photoshop. u can do a lot (the proffs use it) but i now seldom bother bc it is more work even tho it's amazing. i esp love the pucker tool haha!

i'm n expert, but mail me if u need info on how to upload these programs..

Thanks so much for ur suggestions Terri. Very kind of you. But I think those things will just drive me insane...lol...id just better learn to take better fotos...much easier don't u think? so far I only use the 'fix' thing on top of the foto frame that comes out when I look at it on the comp otherwise it is posted as it is. good or bad..heheh..

pucker tool huh? i dont suppose they could have given that a better name..it sounds hiarious..I wonder what it does? ..no dont tell me... LOLOL

mummy, i use photoscape...really easy...but it does tend to pull you in..and i think it will pull you too LOL knowingyou...adjust sikit sana adjust skit sini and beforelong you're on the computer the whole day LOL....and i think your 'not so good' pics are actually good....lol..i know what's going on LOL