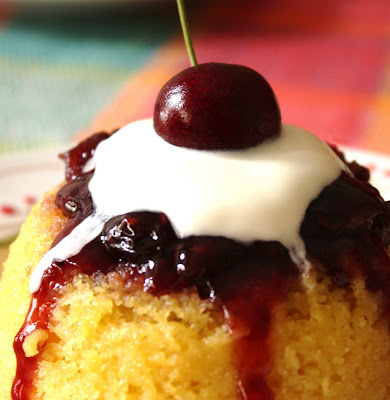 This lovely steamed jam pudding goes back to the time when I was eleven. The most exciting thing that happened to me at that point in my life was having home science classes. Seriously. I took the big step into secondary school and home science was one of the few subjects that flickered me into some form of life. I proudly brought my first Victoria sandwich cake home to grinning parents from that class. It was in that year too that my parents presented me with my first cookbook (probably with ulterior motives :D) and as I flipped the pages my eyes fell and fixed itself on a full page picture of a gloriously moist, dense, golden and buttery mound of a steamed jam pudding capped with a deep, glistening and drooling, crimson jam.

That picture shot straight through my eyes, into my head and lodged itself permanently in a nook of my eleven year old brain. Without ever having tasted jam pudding before I knew that that was good. I made it and truth be told it was good in the way that I had imagined. Wholesome, jammy, warm and comforting. Face linkin' good. 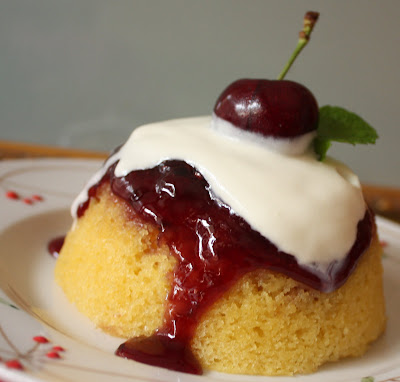 If you're wondering what the jam pudding has to do with the Victoria sandwich cake from a home science class I'll tell you now. I'm not quite sure myself really. It's just that the the thought of the one seems to trigger the existence of the other. I suppose they're like sisters. They both use jam, they both require very basic baking skills, they both use the same proportion of similar basic ingredients and are both British food (fortunately boring does not describe them). But the one being steamed and the other being baked makes them so different in character. It makes one of them dainty and the other like a clod. Heavy, dense but totally engaging. I love steamed jam pud. I'll go for the clod anytime.

Here's the basic recipe from a St Michael's cookbook by Rosemary Wadey...(I've since passed down the cookbook that my parents gave me to my eldest daughter Juli when she was about 10 and who now resides in the US and I trust it is still with her). Although this recipe is for a different sort of steamed pud the basics of this recipe is exactly the same.

Cream butter and sugar till light and creamy. Add eggs one at a time and beat until creamy. Fold in flour that has been sifted with baking powder until well mixed and no flour remains visible. Keep aside.

Fill 1 litre pudding basin OR 3 small Chinese bowls with 2 teaspoons of jam at the bottom.

Grease the exposed sides of the bowl or bowls and then fill with the cake mixture to about 2/3's or 3/4's full. The bowls that I used at first (above) were a little too big so I switched to the smaller Chinese bowls below instead.

Cover with buttered foil and steam for about 25-30 minutes for the small bowls and maybe 55 minutes to 1 hour for the pudding basin. Check by feeling the top. If it feels firm it's done.

Let cool a little. In the meantime heat about 3 tablespoons of jam with a teaspoon of water in a small pot until the jam liquifies. Stir until there are no lumps. Then loosen the sides of the pudding with a butter knife and invert onto a plate. Pour the liquid jam over the pudding or puddings just enough for it to drool down the sides attractively. You may pour some lightly beaten whipped cream over the jam and top with a cherry or strawberry for fun!

Those look so incredibly yummy!

I'm one of those dummies that didn't take home ec! I kick myself now!!

Thanks for sharing the recipe!
~ingrid

mummy i want this pic..the bottom one! for framing. geramnyaa