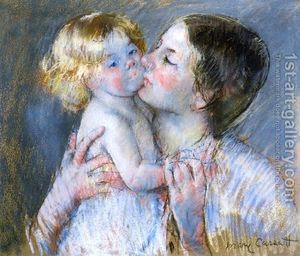 A kiss for baby Anne 2 - a painting by Mary Cassalt

It was like a Pasadena Flower Parade but without the flowers. Wheelchairs rolled down the aisle through the ballroom of the PJ Hilton, one behind the other. It was quite a sight. We all turned and smiled. Most of us stood up and some reached out with kisses and hugs.

There were probably about fifteen of them (maybe more) but each wheelchair carried an octogenarian mama, each woman a great grandmother, a grandmother and a mother, all seated and looking quite sublime, their wheelchairs pushed by their smiling and younger relations.

I looked at them and they reminded me of once great admirals or generals who have fought great wars, engaged in minor battles, who have made difficult, deathly and risky decisions, who have lead unwaveringly, who have toiled with their men in blood and sweat, who have witnessed the pain and suffering of their men and have been admirals and generals who would have gone down with their ships or with their men without second thoughts. I imagined the string of medals or of the Seri Pahlawan Gagah Perkasa Award (the Malaysian equivalent of the Victoria Cross or Medal of Honour) that they must have earned for extreme bravery, courage and sacrifice - had they been serving their country in the the armed forces or the navy. Had they been Generals or Admirals.

This afternoon's book launch was for a book by Kalsom Taib written as a tribute to her mother, 90 year old Zainab Ahmad, "A truly Remarkable Woman". The event was attended by mostly women who were grandmothers, mothers and daughters in their own right. I think we were all buzzing and agreeing on a woman's worth.

As women, we have always known that women need women. And the book was a woman's salutation to the greatest woman in her life whose contribution as a full time wife, mother and repository for her family's physical and emotional needs has been fully recognized, appreciated and given due honour and award. She must have been a truly remarkable woman to have been bestowed with that recognition from her daughter in the full glare of public light.

The reason for attendance was good, the music (Ghazal) was good, the company was good and the food was surprisingly ok good, not excellent but ok good (I have never much looked forward to mass produced function food). But this time around it was pretty good - considering.

This time motherhood and the role of a housewife was being celebrated, recognized, upheld and appreciated. It is a difficult and time consuming job and with the emotional strings attached it makes it one of the most highly strung and volatile undertaking that can be quite hard to bear. Sometimes.

So this is a tribute to a woman who has simply been a good wife and mother in the eyes of her daughter. Nothing more, nothing less. This is not about a woman who has climbed the highest mountain, sailed solo around the world, who has achieved a scientific breakthrough or who has tried to do what men do. It is about being a wife and mother.

I believe it's about selflessness, about sacrifice, about walking the fine lines between between caring and fussing, between concern and prying, between pain and joy. It's about the the future they have put down for the future of others, the dreams they have pushed aside to dream for others and the glory they share should those they love be glorified.

But this time around She was glorified.
Posted by Zurin at 11:30 PM

Yes - it was a truly remarkable event made more so by Puan Sri Zainab the woman who was being honoured, and her bevy of mainly female supporters led by her feisty daughter Kalsom.

I especially like the analogy you make of those wonderful ladies on wheelchairs to army generals being honoured for their courage, bravery and patriotism in defending their motherland.

Indeed, mothers raise daughters and sons who in turn become writers, historians, Generals, Ministers and Prime Ministers and whatever else is worthy of human endeavour.

And as sons and daughters we can honour our mother (and father) in innumerable ways. Writing a biography is only one such tribute!

And I agree the food was nothing to shout about!

And I've deleted your link from my blog friends until such time as I'm sure that the link is secure!
I'm still a novice at operating the wordpress applications!

its ok bout the link....maybe ur cucu cld help...I usually harrass my kids for help..sometimes they do and sometimes they dont....(help):( but hey..m a mother...n we are always walking the fine line betwn patience and tolerace.

Zurin - could you check if your link on my blog friends makes the right connection? Otherwise I'll have to delete it again.

Yeah - I know what you mean! I'll delete all until I get it right!