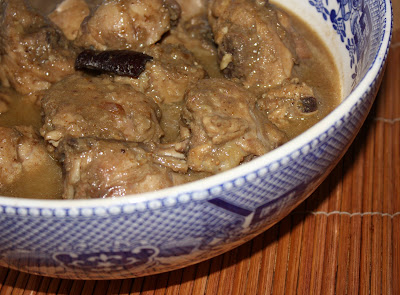 A chicken korma dish from scratch. Dry roasted spices in a pan and ground to a powder. Aromatic. But I have given the measurements for ready ground spices for easier cooking. Korma is a mild and creamy curry. Originating from India korma uses no chillie powder or paste unlike the red curry.

In most of my cooking I prefer using 4 chicken whole legs chopped up with the bones in rather than a whole chicken simply to avoid the breast meat which no one at home likes.The meat from the thighs and drumsticks are always more succulent and tasty.

8-10 shallots, half of them sliced finely
4 cloves garlic
7 candlenuts

Pound of grind to a paste ina food processor half of the shallots and the candlenuts. Heat up about 5 tablespoons of oil till hot and saute the finely sliced shallots until golden. Add the whole spice, that is, the cinnamon stick etc then add the ground shallots and candlenut paste and fry till the paste is translucent and almost golden in hue.

Mix the powdered spices with water until the consistency of evaporated milk and add it to the sauteed onion mixture ans saute until the spice and onion paste turns a darker shade. It will take a good few minutes to allow the spices to really cook through.

When the juices have evaporated some then add the rest of the coconut milk and yoghurt and salt if necessary and potaoto pieces if you like. Allow to simmer until the chicken and potatoes are cooked through.

TIP : The gravy should be thick and not thin so control the amount of coconut milk that you pour in leaving behind a little and adding it if necessary towards the end if you think the you would like more gravy.

TIP : When cutting the potatoes in a curry like this I usually bevel the edges of the cut potato with a knife. A beveled edge is stronger and the potato pieces do not disintegrate easily while simmering in curry or soup, even if slightly over cooked.
Posted by Zurin at 1:39 PM