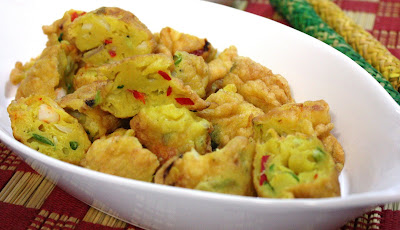 Today was a good day. This recipe has been evading me since I can remember and after ploughing through some disappointing experiments I never could get the chewy yet not tough, compact yet pillow light texture of the 'mamak' prawn fritters that they use for their Malaysian Indian Vegetable Salad or 'pasembur'.

But TODAY I found it!

This was an experiment carried out because we were having a guest over at mid-morning. So what better savoury to serve for a Malaysian mid morning snack than a vegetable prawn fritter? I'll tell you all the whys of this recipe later.

10 fairly large prawns, 3 of them minced with 1/2 teaspn of cooking oil and the remaining 7 to be chopped coarsely

About 1 1/2 cups cooking oil for frying

Stir all the dry ingredients until well mixed. Add the eggs and liquid and mix till smooth.Add in the prawns (both the minced and chopped ones) and the vegetables. Mix thoroughly.

Heat up about a cup and a half of cooking oil in a small wok. Drop tablespoonfuls of the mixture into the hot oil and fry until a golden brown.Make sure they're cooked in the middle since the puffs are quite big. Drain on kitchen paper.

Cut into chunks and dip in Lingham chilly sauce or mayonnaise to savour. (I love Lingham's - the chilly sauce not the man)

TIP : Starchy cornflour contributed to the chewiness of the fritter. I made the batter thick and gooey instead of slightly runny. This also gave it the solidity and compactness that I was looking for.

TIP : The two eggs used contributed to the lightness and sponginess but at the same time giving a firm structure as well as a richness to the fritter so that it did not taste tough, dry and floury.

TIP : The addition of coarsely chopped and irregular shaped vegetables and prawns caused air pockets to form in the batter as it cooked. In contrast to the denseness of the rest of the fritter this gave the fritter a lightness as you bite through little air pockets that were achieved without having to resort to any leavening agents.

I don't like that photograph at all. :( I'm still working on my photography skills. Please bear with me. TIPS anyone? oops my sons say it's the food that's ugly.....as in the colours and the whole look in general...in that case maybe we should play down on the tumeric thing.......but it's tummy yummy though. So never judge a food by its colour.
Posted by Zurin at 5:10 PM

Hai, Auntie Selamat Hari Raya. I love all your recipes. Everthing looks YUMMY, YUMMY N YUMMY. and the food pics erm... they are really good, make me terliur lah. Wah, Sweetie got so many space in this blog ya auntie.

selamat hari raya Didie. glad u like the recpes an pics. Still trying hard to make them look even yummier so that everyone terliur..ys actually sweetie is not part of the food but susah auntie want to take away her fotos ..cute sangat..hehe