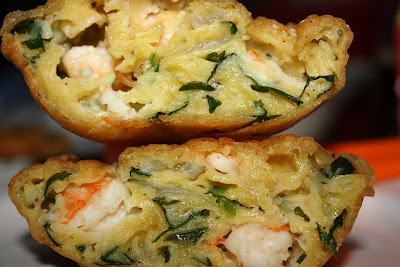 I spent a sleepless (almost) night thinking about the pathetic photograph that I took of the prawn fritters yesterday. I woke up with prawn fritters on my mind (what else?)

Result : I ended up with an improved version of the previous recipe. And if I have to say so myself, I'll have to say that those were the best prawn fritters that I have tasted in a long long time. Such a minor adjustment that made so much difference.

And ah.....I now know now how to make use of the macro setting on my DSLR camera, indoors, at night, without getting strange alien hues in my photographs. I just turned the kitchen lights off and took the pictures in the dark. It seemed to work a little better, strangely enough.

Okay here's the much improved recipe and one that I wholeheartedly recommend. And I think these are actually better than the original mamak ones I've tasted. Look at that crust! 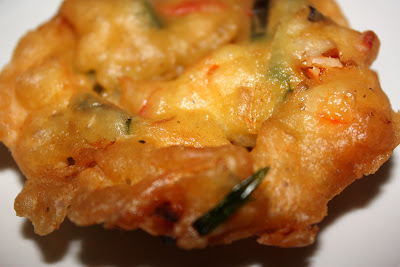 2 eggs
100 ml water, a tablspn or two more if the mixture is too thick that you can't mix

Mix all dry ingredients first. Add water and mix well until no lumps are visible. Add the rest of the ingredients and mix well. Deep fry in about 2 cups of hot cooking oil, a tablespoon at a time, until golden brown and crisp on the outside. Enjoy with a dipping of chilly sauce or mayo.

TIP : Fry fritters until firm but pale and not brown at all. Lift out and drain. Re-fry them to a golden brown and you will have a beautiful golden crisp crust.

TIP : Baking soda never fails to add a deeper colour to your cakes and crispness to your fritters.

Compare it with the prawn fritters from the previous post and I'm ashamed of my yesterself.
Posted by Zurin at 6:53 PM

oh Good! glad that the foto inspires!
Thanks for visiting.

I'll have to agree with Denise :) Looking at this makes me what to make it right now :)