At last, at four o'clock this afternoon, I managed to pry myself out of the house and drop in at The Cake Connection.

The store has been occupying my mind since I heard about it a week ago. But I was completely mistaken about its location. So before I get sued or get carried off by the blog police I had better put things right.

I went there first and saw to my dismay the old blue building looking dejected and forlorn. Absolutely in need of a renovation.

I asked around but no one seemed to have heard of Jaya One. But after a few twists and turns I laid eyes on Jaya One. Unfortunately that was not the end of my problem. It was merely problem number one.

However, after a hunch, an insight and a touch of my female intuition I stepped out of the car in front of a flight of concrete steps leading to up a fluff of trees at the top that totally, almost totally, obscured whatever it obscured.

Before I attempted to walk up I looked at a guard seated quite comfortably on a chair at step number one.

Apprehensively, I approached him, fearing that I would be facing a language problem in case he might be a Myanmar who can't speak Malay or English while the only language I spoke was Malay and English. If so that would have been problem number three.

Thank God and to him that he understood me and told me that Kluang Station was at block D and waved his hand quite ambiguously.

Hmm.... Block D.... had I been a bird...I'd know where block D was right away. But from where I was coming from it could have been any which way and, by the way, there was nothing wrong with my sense of direction.

Being very enthusiastic about showing that I was lost I stopped and intruded into several conversations to ask for more directions to Kluang Station, although I wasn't actually going there.

I had heard that The Cake Connection was just above Kluang Station which was of course not a 'station' but a coffee shop modernized and chic.

Ah.. there it was...Kluang Station. I circled the place vulture-like, eyes sharpened to a glint, impatient and hawkish until the stairs leading to the first floor me could not find.

Ah.. the waiter boy... standing idly by, at the entrance, was just waiting to be of service. He curved his arm backwards to a flight of stairs, and me, me went up except that it wasn't a flight of stairs as me thought.

It was an entrance to a couple of lifts, one of them, lined with slightly punctured plywood.

When the doors to the lift opened I walked out, looked left, and it was like walking into a brick wall that just ran up to me. I almost bumped into the entrance to The Cake Connection.

After all the hassle and mazey detours I had been through arriving there was like getting a pie in my face.

I peered and rang the buzzer. Along came Sharmini ( please forgive me if I got your name wrong), very warm, friendly and welcoming. And so was her colleague Nancy.

I asked for some fondant embossers with pretty scroll-like designs so that I could blatantly copy, duplicate and plagiarize Zalita's cupcake art from South Africa but unfortunately they did not have any yet.

No matter, the place looked interesting and I was more than willing to idle between shelves.

They had loads of beautiful sugar paste flowers, in lilies, roses, daisies all beautifully crafted, bottles of vanilla extract, novelty cake tins and other cake art tools. A complete haven for cake art enthusiasts. They offered classes and warm, interested personnel. What more could one ask for. Check out The Cake Connection.

I picked a packet of...no not sea shells...of icing powder, went over to the counter and chatted with Sharmini while digging into my handbag for my money that was pining away in the deepest recesses of it.

Phew.... it was a good thing I was armed with two ringgit and eighty sen that day which made everything else there beyond my, no not imagination, my realisation.

However, I did not buy enough ingredients that I could make fondant with. So Bake with Yen here I come.

I arrived and the only thing that I got there though was a two ringgit bottle of glycerin. The cashier and staff were in a super 'take it or leave it' mood, as always, so I took it and left.

I turned left and eighty footsteps later I stepped into Chang Tung. Sour pusses sat like sentinels as I walked in.

These were what I bought today. All in all I spent fifty one ringgit, I think, for cupcake art that's still as abstract and as impalpable as my dreams but perhaps one step closer. 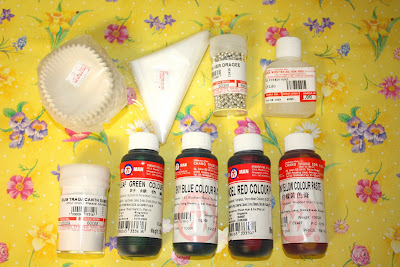 love the narrative! lol...if it was me, I'd have given up awal2 lol, or drag fahzy to help me LOL

Yes ..u wldnt ask the Myanmar gaurd wld u?

LOLOLOLOLOLOLOL hmmm...probably not..or depending on my mood LOL if i feel brave I might LOL