I am not a foodie in the holiest sense of the word. I never knew foodie, the word, or the people, were nouns or a religion until I started this blog. When I meet friends I would rather talk about life, it's joys, it's pains, dissect it, chew it, get hysterical and finally try to digest it without getting constipated.  But one day when I was bored enough I looked it up. And this is how a foodie is described on slashfood.com.....

A foodie is someone who has an ardent and refined interest in food.....to be a foodie is not only to like food, but to be interested in it..............Generally, you have to know what you like, why you like it, recognize why some foods are better than others.......

It's those first thirteen and last eight words that disturb me. Refined? Nor do I know why some food tastes better than others. All I know is that  it tastes darn gooder .

Apart from the fact that What The Dog Saw by Malcolm Gladwell is a wonderful book about creeping into the heads of others, and looking at life through the windows of their eyes, it also gave some very educational passages on taste in one of its chapters.  Suffice to say I now have educated tastebuds. 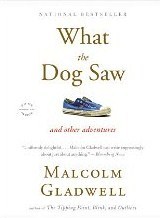 This may sound redundant but I now know, with enough indignation, that the five known fundamental tastes in the human palate is salty, sweet, sour, bitter and umami.

Umami  is described so well here. "....is the proteiny, full bodied taste of chicken soup, or cured meat, or fish stock, or aged cheese, or mother's milk, or soy sauce, or mushrooms, or seaweed, or cooked tomato. ....."Umami adds body...... If you add it to a soup it makes the soup seems like its thicker - it gives it a sensory heft. It turns the soup from water into a food." "

I've also learnt that " you can't isolate the elements of an iconic, high amplitude flavour like Coca Cola or Pepsi. But you can with one of those private label colas that you get in the supermarket. "

The private label colas may be "kind of spiky", and you can usually pick out the tastes individually....like "a big fat cinnamon note sitting on top of everything", or you may find yourself conscious of a clove note .... " a sensory attribute that you can single out and ultimately tire of." In other words it doesn't taste as smooth, as balanced and as gorgeous. As the real thing.

A passage in this book describes (positively) and quite sensually Heinz Ketchup. "It begins at the tip of the tongue, where our receptors for sweet and salty first appear, moves along the sides, where sour notes seem the strongest, then hit the back of the tongue, for umami and bitter, in one long crescendo. How many things in the supermarket run the sensory spectrum like this?"

You just know its better. Because it tastes darn gooder.

Sometimes I wonder if I've learnt anything.

I'm not a foodie either. I'm a glutton.

And your comment on Coke, Garlic and Ketchup make up my ideal trifecta.

Oh, I suppose I should also include, butter.

I always prefer my food to taste gooder.

I don't know whether I can call myself a foodie :p to me as long as it is food I will say it is good...a simple momsie who love playing with ingredients and practical lives in the kitchen :p

we love dogs and the chapter of the book tt's same as the book title was enjoyable read. totally agree with about how dogs look at their master's face and act accordingly while other animals mimic actions without looking at human faces; they don't connect.however, it's not true tt only dogs look at human faces. i keep some chickens n i found tt our cockeral looks at my face, from far, n it's always suspicious of me. good book, very informative:)btw, hav u decided on a camera? nikon d7000 just came out. i am so tempted to get tt but it's so heavy, heavier than the d90...i dunno..

Thought this was really interesting - that debate (or is it a matter of self-perception?) of whether somebody's a foodie can be quite personal in a lot of ways... And then I got to Marysol's comment, laughed myself of the couch with mirth and agreement (too much emphasis on snobbery nowadays, and far too little on the simple pleasure of gluttony!). I swore I wasn't a foodie, and then discovered recently on my honeymoon that perhaps, when I had a mile-long list of researched bakeries to visit, and quoted David Lebovitz round half of Paris, that just possibly I was in foodie denial. But I prefer to maintain I'm just a relatively well-informed glutton!

I think I am a foodie wannabe... I do want to understand what I am eating , the flavors I am tasting...for that, becomes the foundation when you cook. At the end of the day, the best food is the one that pleases you.

I consider myself a real foodie but not in these senses that are mentioned here,..I think about food all day, love all kind of foods, even divine 3 Michelin starred foods,...But also normal everyday food!

Funny! Well hmmm ... I can talk about food 24/7 and I am admittedly obsessed with it, but I think the word "foodie" connotes a certain snobbishness and boorishness that I really hope I am far far too silly yo have!