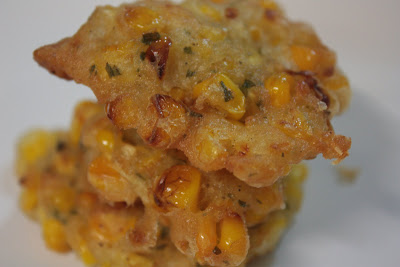 This is an amazingly simple recipe with amazing results. Crunchy, full of the fresh raw nuggets of sunshiny corn just off the cob fried to a golden crisp. The addition of cornflour adds to the crunchiness. Good for a snack or as an additional dish to a meal. I have tried many versions and have found that the large proportion of raw corn to flour is the key and essence of what I think makes a good corn fritter.

Mix flours, peppers, salt and parsley flakes into a bowl. Add raw kernels. Add water. Mix. Heat oil in a pan. Fry. Shallow fry a tablespoon at a time until a golden brown and crisp and crunchy to the eye. Drain. Serve. With or without a chillie sauce. Enjoy.

TIP* If you're thinking of using canned corn kernels, think again. It's not going to work because there is simply too much moisture in them that the finished result will just not be the same. You'll miss the crunchiness and the bite of raw fresh corn off the cob fried to a nugget. mmmfh...

TIP* To make an even yummier version, add minced prawns/shrimps to the mixture or vary the flavour with chopped coriander instead of parsley. Create.
Posted by Zurin at 11:23 AM

Juli dear, u can always try other flousr from the organic shop that is not wheat. plenty of choice and Im sure it will work. the flour simply acts as a binding agent and m sure other flours will work as well.