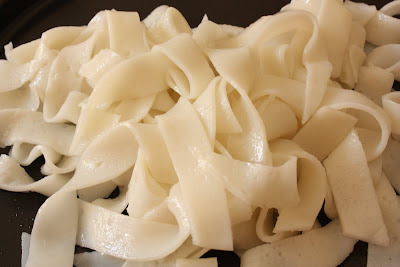 I went in search of Kuay Teow (flat rice noodles) today at the wet market; yesterday, at the supermarket, and I just couldn't find any that said 'No Boric Acid' and 'No Preservatives". I used to get a brand that didn't use boric acid before but they are no where to be seen now. But even if they are still being manufactured the kuay teow that they produced wasn't exactly fantastic. I had bought it only because those were the only ones that did not use the dreaded boric acid.

Just in case you didn't know boric acid gives the noodles its bounciness plus a host of ailments if you ingest it. And since the enforcement of rules and regulations not to mention the law is somewhat questionable for the time being (I remain naively hopeful) I would rather avoid foods that are a threat to my family's health and well being.

I nag about this to the children all the time so that they avoid such foods when they eat out so much so that I'm beginning to see more whites in their eyeballs every time I talk to them. They'll thank me for this one day!

So I did a little digging around and found a recipe for flat rice noodles in a Taiwanese recipe book. I tried it and it was a complete disaster. Heh.. did you think I was going to say it was perfect? So I made further searches and I came across this recipe from a blog called neckredrecipes.blogspot.com and Sinner from this blog shared this really fantastic recipe for kuay teow. It's easy to make and tastes really good. Anytime better than the bought ones. So I have been eating and serving fresh homemade kuay teow to my family since and with a very clear conscience since it does not contain anything harmful.

Had I known that it was so easy I would never have bought kuay teow not even the 'safe' ones because even those look slathered with magarine and had a funny taste to it. Perhaps they put too much lye water in it. Lye water is basically alkaline water and is considered a poison. When ingested it can cause corrosive burns especially in the throat, oesophagus and the stomach lining.

In case you didn't know lye water is used commonly in yellow noodles, dried noodles, dried cuttle fish and also in pulled Chinese noodles and many other foods to give them the elastic and chewy texture. That's why I seldom or almost have never eaten yellow noodles or even kuay teow (except for the so called 'safe' ones) for the past several years since I had learnt this.

Lye water or alkaline water can be found easily in grocery shops. They are sold in clear glass bottles.

This recipe for kuay teow uses just rice flour, cornflour and wheat starch flour. All these can be found in your bakery supply store readily. Wheat starch flour is not the normal wheat flour but according to Sinner from Neckredrecipes.blogspot.com it is a non-gluten flour where the gluten has been removed leaving behind the starch, hence the name wheat starch. Please click here for a clearer explanation on noodles containing gluten and noodles which are non-glutinous which in turn explains the difference between wheat flour and wheat starch. According to Sinner wheat starch is called Tung Meen Fun in Chinese.

And I'm telling you that this is a really great recipe. Although it is a little time consuming it is definitely worth the effort. I've been told to never say never but I'll say now that I'll never buy kuay teow again.

One recipe makes about 500 gm of kuay teow and that is enough to serve 2 to 3 people.

2 or 3 shallow round cake pans (I used non-stick) that fits into your steamer. Grease them well with cooking oil using a pastry brush.

a plastic spatula for lifting off cooked sheets.

Mix all ingredients together and let rest for one hour

Get a steamer ready and bring the water to a rolling boil.

There are two ways of making these noodle sheets.

Pour enough of the flour mixture into the oiled pan to form a thin layer (I like my layers slightly thick) and then steam for about 5 minutes on high until the sheet bubbles up in the pan. Remove the pan from the steamer and put in the next pan with another thin layer of mixture. While waiting for the second pan of noodle sheet to cook in the steamer the first sheet would have cooled down already. When it has cooled down enough for you to handle loosen the edges with a spatula, lift up an edge, roll it up, take it out of the pan onto a board and slice as wide or as narrow as you want. I love slicing it wide. Carry on doing this using the three pans consecutively until the batter has been used up. You might need to re-grease the pans once in a while.

Alternatively, as a second method, I have also tried stacking up the layers in one pan, one layer at a time, adding on another layer of batter after the previous layer is cooked through. If you choose to do it by this method you should brush the top of the previous cooked sheet with oil before pouring on the next ladle of batter over it and the same thing goes for the following layers. (Always brush the previous layer with oil before adding the next ladle of batter). This method however requires a longer steaming time after the final layer to ensure that the last few layers are really cooked through. What you will end up with is a stack of noodle sheets in one pan looking very much like a solid white cake. I suppose it might be possible to invert the whole stack onto a plate or board when it has cooled and then proceed to seperate the layers by rolling or folding the topmost layer off first, lift it off onto a board and slice.

I have not been completely successful with the second method and at the moment I have only been able to stack at most three layers in one pan. I also find that it takes a longer time to do it this way.

So for the time being I prefer to cook the sheets one layer at a time using all three pans. The picture below however shows a three layered stack that I managed to do (by the second method) ready to be peeled, rolled and sliced. 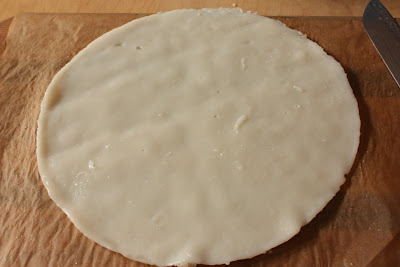 Redneck recipes has a great video showing how to make it here. And a great site. Thanks Sinner!
Posted by Zurin at 11:11 PM

THIS is one of those must-have recipes. thanx zurin, for discovering it n sharing with us.

i too am always telling my kids not to eat this n tt. just an hr ago i was in the supermarket choosing a tub of icecream n this lady asked her kid if he wanted the colorful ice cream to which he excitedly shout "yes!" n as they took it n walked away, the boy jumping up n down, i felt sorry tt some mothers aren't well-informed about their food choices.

hope u get ur template back. can u get some comp expert to help u out? usually the boys can do the job.

er, i think wheat starch or tang mien fun is gluten starch, which means the other way aroundi.e. it's the gluten/protein after removing the flour. tang mien fun is the starch used for making transparent steamed pastry such as crystal pastry n ha gow/prawn dumplings

Gosh Thanx Terri! I'll put that right right away...funny ..i muist chk Sinner's explaination again..I must have misread it. Ys.. I feel bad too that some mothers are unaware of all that food preservatives and toxic substances in food...I suppose we all have to learnt he hard way sometimes which in turn makes it hard on us cause we end up manufacturing food at home!! LOLOLOL

Terri, I checked with Sinners blog and she says that wheat starch is a non gluten flour. What do u think? Thats why I thot that it meant that the gluten has been removed. hope u can help me clear my confusion. thanx!!

this is amazing!!!!!! wait till I get myself a stacking steamer!!

I love kway teow, am going to try making it one day, imagine cooking my own home-made kway teow soup, yum yum.........

yes try this its really good . I suppose for soup u mite want to make it thinner though and perhaps softer. Let me know how it turns out k

zurin, u r right. gluten is wheat starch (which is not wheat flour) or flour tt has the gluten or protein removed. actually, come to think of it, it makes sense bc tang mien flour gives a soft pastry, unlike gluten flour which is used to make gluten balls or imitation meat which has a strong bite. sorry for confusing u (& myself)!!

thanx terri! its very confusing indeed. good of u to chk it out.thnks again.

oh m so glad it worked out great! fantastic isn't it? :D please do a post and yeah I cld do with the credit :D

oh i see, now i understand and should eat less yellow noodles then. Anyway they always seems to taste a bit bitter, i think due to the lye water.

Hmmm... I think lye water will burn my throat if I drink the whole bottle of it, undiluted. Anything with a low PH acid or high PH alkaline will burn, but when they are diluted with water, their potency is reduced, and somehow I don't believe that 1 tsp in 1L of water will burn me anyhow, as the potency depends on the molarity of the solution, of which 1tsp in 1L is truly truly low , and the juices from my tummy which are PH1 with a high molarity, will really burn my throat if they ever get back up from the stomach.

Just my 2 cents, hope you don't get annoyed with this.

No problem Wendy..its good to get different opinions...what about boric acid? is it safe too? The problem I think is that people here put in excessive amounts and the authorities don't regulate or enforce the rules...I think that is the biggest problem really.

Hello Cherry on a Cake,
We had also stopped buying those dreadful poisonous rice noodles a while back, and have been missing it ever since. Thanks to you, we might be in for a treat in a few days! Thanks for posting this recipe!

Hi Kumi, thanks for coming by. and Im glad you going to try this :))