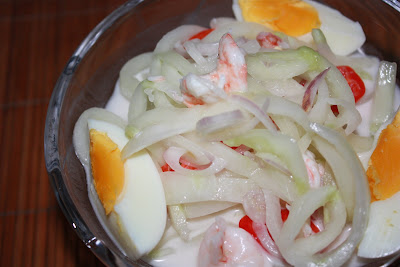 This is a very simple cold salad that is very refreshing and easy on the palate. It balances a rich and spicy meal.

About 1 cup of thick coconut milk, the consistency of fresh milk
salt to taste
squirts from 1 large lime

Mix all sliced vegetables and prawns with the coconut milk, lime juice and salt.Season and adjust to taste until the balance of salt and sourness and the sweetness form the coconut milk is just right.

Place the mixed salad in a serving bowl and then place the quartered egg randomly around it. Chill before serving.

TIP : In the picture you can see that I did not slice the cucumber in the normal way but what I did was to cut the cucumber into short 1 1/2 inch lengths and then I ran the knife around each length spiral-like until I reached the core and threw the core away. It would look something like the skin of an apple that does not break off when you peel it around and around and around continuously. Then I sliced the 'spring' into thin strips. Sounds confusing?Actually slicing normally would be perfect but I just wanted it to look a little nice in the picture that's all.
Posted by Zurin at 10:30 PM