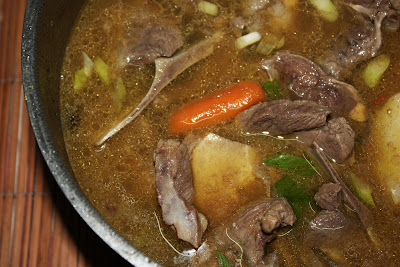 This dish is not spicy as in chillie hot but spicy in the sense that it uses spices like coriander, cumin, fennel etc. A deeply satisfying and quite rich soup, it is the typical 'Sup Tulang' (bone soup) in the Malay home. Beef ribs or oxtail are usually used for a soup of this kind but since I stumbled upon some shoulder of mutton at the supermarket today, mutton soup it is.

It's lovely eaten with a steaming mound of plain white rice of with some yellow noodles plunged into a steaming and soupy bowl of it. Either way its delicious.

Process or pound in a pestle and mortar half the onion, garlic and ginger. Slice the other onion half. Keep aside.

Dry fry the whole cumin and fennel until it releases its aroma. Then pound in a pestle and mortar until a powder and mix wth the powdered coriander and white pepper. Add water to make a paste.

Chop the shoulder of mutton into smaller pieces if necessary and remove excess fat.

Saute the sliced half large onion until a golden brown. Add the pounded onion, garlic and ginger and saute furhter until aromatic and the onion mixture is soft and slightly brown at the edges.
Add the spice paste and stir and continue sauteeing until aromatic. If you find it a little dry add some water and saute until it turns a darker and it seperates from the oil a little.

Add just boiled water and then the mutton bones/shoulder and add some more water until the bones/meat is covered. Add salt and let the soup come to a rolling boil and then reduce the heat and let it boil gently until the meat is tender.

Add cut potatoes and the baby carrots and simmer until the vegetables are tender and add salt if necessary.

Chop some scallions and sprinkle them onto the soup just before serving followed by some sliced and golden fried onions if you have them (I did not).

TIP : the only reason I used powdered coriander is because I did not have any coriander seeds in my cupboard. I prefer to dry fry them myself and then pound to a powder rather than use the powdered ones as I feel it is fresher and releases more aroma. 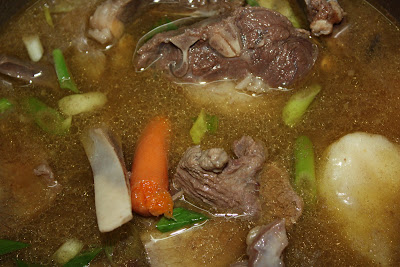 Heheh, just had it for dinner.

Thank you Terri..tastes pretty good too..!